PMUTs enable medical, endoscopic in vivo imaging devices and ultrasonic radar for autonomous mobility and industrial machinery. An array arrangement of PMUT sensors and actuators enables imaging of the environment.

At Fraunhofer IPMS we use piezoelectric or ferroelectric hafnium oxide (HfO2). This ultra-thin ferroelectric transducer material was discovered in 2011 and is ideally suited for integration into existing CMOS and NEMS processes. The moderate piezoelectric coefficient and low dielectric constant of HfO2 is optimal for applications that require a combination of sensors or receivers and actuators or transmitters. The ultra-thin realisation of the NEMS sensors also enables a three-dimensional acquisition of the signal data. In addition to the conventional out-of-plane movement, miniaturised in-plane movements can also be realised, which can be used for miniaturised sensors. 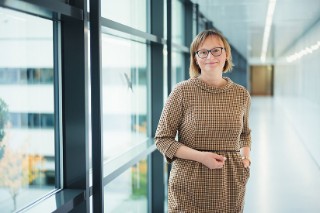