Wireless headphones with MEMS speakers for the Internet of Voice

Voice-based Internet services are increasingly accepted by many users as a central component of future data processing. For example, in the car, in the smartphone and in the living room. Similarly, renowned hardware and content providers are focusing their business on such products, which are also used in Internet-enabled mobile devices worn directly in the ear. Today, numerous voice-based services are available. Examples include simultaneous translators, payment services and marketing solutions[1]. The vision of an Internet-of-Voice permanently worn in the ear is thus taking shape. Hearables, which are predestined for this, are increasingly claiming the inheritance of smartphones and emancipating themselves from the less smart Bluetooth headsets.

In the future, hearables will not only contain audio technologies, but also powerful processors for data processing and will be directly connected to the Internet via wireless interfaces. Similar to the GPU for smartphone displays, the processors (in addition to the wireless interfaces) will dominate the energy requirements of future hearables and thus their runtime. Since the space and thus the capacity of the battery in the ear is very limited, all other components will have to get by with a very small energy budget to enable sufficient runtime.

Fraunhofer IPMS has developed a new, power-efficient transducer principle for a central core component of the hearables - the in-ear speaker - and presented it in the journal Nature Microsystems and Nanoengineering. By publishing the scientific findings, experts agree on the novelty and significance. This makes the innovative approach accessible to a wide audience of experts.

Since submitting the paper to the journal earlier this year, work has continued intensively. The subsequent improved generation of MEMS loudspeakers is already in the lab. In addition to further improved linearity and higher sound pressure, it was also possible to further reduce the drive voltage and thus the power consumption.

In addition to the further increase in the characteristic values, the integration, in particular with the control electronics, is now increasingly becoming the focus of the work at IPMS.

MEMS based headphones for the Internet of Voice

Mems transducer for interacting with a volume flow of a fluid.

In October 2019, the spin-off Arioso was founded at Fraunhofer IPMS. The aim of the spin-off is to bring the novel sound transducer principle for miniaturized headphones, so-called hearables, to market. 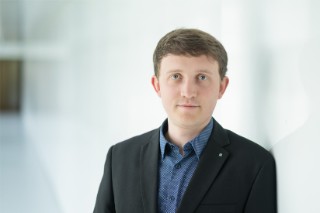