Wireless headphones with MEMS speakers for the Internet of Voice

Many users are now increasingly accepting voice-based Internet services as a central component of future data processing. For instance, in the car, on the smartphone, and in the living room. Renowned hardware and content providers are similarly focusing their business on those products which are also to be used in Internet-enabled mobile terminals worn directly in the ear. There are numerous voice-based services available today. Examples include simultaneous translators, payment services and marketing solutions[1]. The vision of an Internet of Voice worn permanently in the ear is thus taking shape. The hearables which are predestined for this are increasingly laying claim to the legacy of smartphones and emancipating themselves from the less smart Bluetooth headsets.

In the future, hearables will contain not only audio technologies, but also powerful processors for data processing and will be directly connected to the Internet via wireless interfaces. Similar to the GPUs for smartphone displays, the processors (along with the wireless interfaces) will thus dominate the energy requirements of future hearables and, consequently, dominate their battery runtime. Since the space available in the ear and, therefore, the capacity of the battery is very limited, all other components will have to run on a very small energy budget in order to ensure sufficient battery life.

The Fraunhofer IPMS has developed a new, power-efficient acoustic transducer principle for a central core component of the hearables – the in-ear speaker – and has presented it in the Journal of Nature Microsystems and Nanoengineering. By publishing the scientific findings, reviewers agreed to the novelty and significance. This makes the innovative approach accessible to a broad expert audience.

Since submission of the results to the journal at the beginning of the year, the work has continued intensively. The improved next generation MEMS speaker is already in the laboratory. In addition to further improved linearity and higher sound pressure levels, the control voltage, and consequently the power consumption, has been further reduced in this speaker.

Apart from increasing the characteristic values further, the focus of work at IPMS is now moving increasingly towards integration, especially with control electronics.

You can look forward to further news on innovations of the future and are welcome to contact us!

Mems transducer for interacting with a volume flow of a fluid.

Article in "Nature Microsystems and Nanoengineering"

Micro loudspeaker made from silicon

Press Release (19/10/09) - The vision to enhance the Internet of Voice with Hearables to be permanently worn in the ear is taking shape.

In the coming years, demand and market penetration for Internet of Voice services are expected to grow. Services are already available via Hearables, intelligent wireless headphones equipped with mini-speakers combined with numerous additional features that are inserted directly into the human ear. When the required hardware is sufficiently miniaturized to fit comfortably and permanently in the ear canal, these micro-headphones will have the potential to take over the entire Internet communication.

Together with the Brandenburg Technical Universtiy Cottbus-Senftenberg (BTU), scientists at the Fraunhofer Institutes for Photonic Microsystems (IPMS) located in Dresden and Cottbus have developed a new, power-efficient acoustic transducer principle for in-ear loudspeakers. This central core component has now been presented in detail for the first time in the Nature Microsystems and Nanoengineering scientific journal.

No longer using a conventional membrane, the new acoustic transducer principle takes form in a variety of bending actuators similar to the strings of a harp placed within the volume of a silicon chip. New types of electrostatic bending Nano-e-Drive (NED) actuators have been integrated into the only 20 μm thin transducers. The voltage of the audio signal causes the actuator to oscillate. To prevent any acoustic short circuit on either side, a team of scientists led by Bert Kaiser, Holger Conrad and Prof. Harald Schenk bonded two silicon wafer layers with input and output slots on both - the top and bottom of the bending NED actuators. The work presented results in a micro speaker completely manufactured via pure silicon technologies.

The first battery-operated demo system for in-ear playback was developed. For the first time, sound pressures greater than 100 dB and promising linearity has been presented. An amplifier drive circuit making it easier for commercial customers to access benefits in terms of both shape and energy efficiency is currently being developed.

From 2016-2018, the acoustic transducer technology based on MEMS processes was founded by the German Federal Ministry of Education and Research (BMBF) in the VIP+ “MEMSound” project as well as further developed and patented for the Hearables, Hearing Aid, and Smartphone markets. 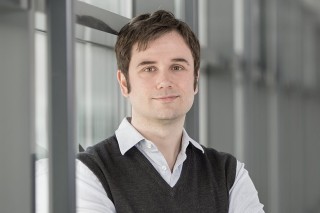